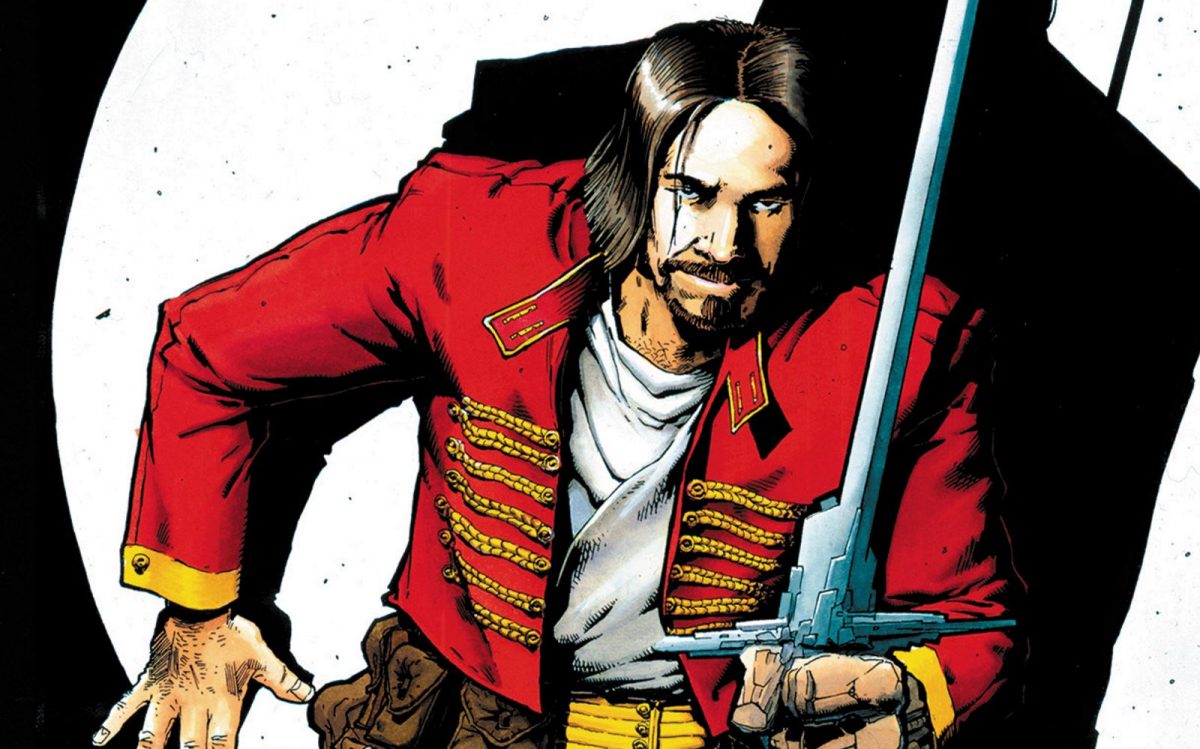 In Prog 1791 of 2000 AD, Nikolai Dante, finished his last adventure, Sympathy for the Devil. Dante, the Russian who’s “too cool to kill,” was created by Robbie Morrison & Simon Fraser.

While I’m a newcomer to the Dante experience, I enjoyed the story and art of Nikolai’s fateful wedding day nonetheless. After much anticipation from me, I now present responses, insights, and vivid stories from the Scottish artist.

Red-Headed Mule: While I’m late to the Nikolai party, I’ll still congratulate you and Robbie Morrison on ending the saga. How did you feel after finishing the last page?

Simon Fraser: It felt satisfying in an immediate “I’ve hit my deadline” kind of way. I find it difficult to see Dante beyond that point so it feels like an ending. It feels like we’ve said all that we can say and now we can let him go. When I see it in print next week I’ll have more of a sense of closure probably.

RHM: How long did it take for you and Robbie to make Sympathy for the Devil?

RHM: How much of your personality have you put into the characters?

SF: Dante is certainly a product of both Robbie and I. His happy-go-lucky attitude is pretty much the way we behave after a few beers. I’d like to think we share a certain boyish charm 😀

RHM: Were there alternate endings to Nikolai Dante?

SF: Nope, that has pretty much been the ending since the beginning. There are some small details that have matured, but ultimately this has been the endpoint we discussed a decade and half ago.

RHM: Was there anything you wanted to put in any Nikolai Dante story but had to leave it out?

SF: I think we really went down most of the interesting paths, some maybe a bit too far, some were only hinted at. It could have been spun out for another decade at least, but I think when you do that you are really putting a character into a kind of stasis.

Nothing really changes, some of the most interesting things that we could do with Dante, his aging , him dealing with the deaths of friends and loved ones, would be impossible if the character had to constantly return to the same zero-point every few years. An epic has to have a sense of structure, there has to be change and a sense of moment and consequence for it to have that sense of epic scale.

I don’t feel any regrets about things we didn’t do, but I’m very glad we got the chance to actually end the strip the way we did. There was really no incentive for 2000AD to do that, beyond wanting it to be the best story it could be. So hats off to them.

RHM: What’s your next project? Any new ideas for ACT-I-VATE?

SF: I’m working on the continuing adventures of Lilly Mackenzie, which will be in ACTIVATEcomix then I think in the Judge Dredd Megazine.

ACTIVATEcomix itself is getting a serious makeover in time for the 7th anniversary in February. A new website, a new format. That’s taking up a lot of time right now.

Oh, no! A sight gag!RHM: Was Deja Voodoo inspired by doodling on Post-It Notes? It appears to have a pen-on-Post It look.

SF: Deja Voodoo is very much an in joke. It’s a fairly direct satire of my friend Dean Haspiel‘s comic ‘Billy Dogma‘ , the panel structure and the colours are all taken directly from Deans comic. You can read both of them on ACTIVATEcomix.

RHM: What was the most interesting conversation you have had with a Russian?

SF: Many, I know a lot of Russians. Frequently those conversations get forgotten in a drunken haze. My Russian upstairs neighbor volunteered to translate Dante into Russian once. I’m not sure he understood just how much work that was going to be.

RHM: What’s the closest you’ve had to a swashbuckling adventure?

SF: I lived in Tanzania for a time, we had a nice house in a village and we had a nice lady called Mary who came and cleaned it for us. Mary’s husband had left her years before and she had to bring up 5 sons all by herself. The youngest was Patrick, 12 years old at the time . He ran away from home and obviously she was beside herself with worry. Her older sons managed to find out where he had gone.

Tanzanite gem by Didier DescouensThere’s a semi precious stone called ‘Tanzanite‘ it’s found in only one place in the world, Mererani near Arusha in northern Tanzania. Tanzanite has value because it has a very limited supply and theoretically anyone digging in Mererani mines can strike it rich, sell their stone to a dealer and make a lot of money.

The problem is that a lot of money in northern Tanzania is $20. The dealer then sells the stone for several hundred dollars, it gets flown to New York or Amsterdam and sold for several thousand dollars. The miners get screwed, but there’s nothing they can do about that. It’s the only means they have of making any money at all. So the mine is the last ditch desperation effort for many men. I say men quite specifically because the last ditch for women is prostitution, which is more profitable.

The stuff is basically dug out of the ground by people with shovels or even fingers and small children are sent down narrow shafts to dig where men are too big to go. Many of them die. Patrick had gone to Mererani.

So 2 of his older brothers, my friend David and I got in my 4×4 and we drove the 60km to Mererani to try and find the kid. It’s a long way over broken desert terrain, the only way the kid could have gotten there was to have been picked up in town by some very shady people and taken there.

So we eventually managed to get through the rough foothills around the mine and arrived at a place I can only describe as a kind of hell. There were hundreds of men there, living under plastic sheeting on the ground. They were filthy, starving and blank-eyed and as soon as we arrived they started to mass around the car looking for food.

I have never seen people as degraded or as pitiful as this before or since, but at the same time they had now surrounded the car and were tapping on the windows and the body panels to try and get our attention. The 2 brothers got out to try and find the kid and my friend and I locked the doors and tried to ignore the moaning and the pleading of the crowd outside.

There were several hundred people around the car now and more were arriving all the time. We sat there for quite a while waiting for the brothers. I had no idea what we were going to do, if the crowd had gotten violent we were screwed. After some time, miraculously, the brothers came back and they had Patrick with them. He was dirty and near starved, but he looked ok. I then had to start the car, gunning the engine and beeping the horn to get people to move out of the way. They let us through. We drove back home in silence and brought the boy home to his mother.

I’ve told this story a lot of times now, I’ve heard it told by other people and every time people ask me about it the story seems to acquire new details and embellishments. A friend had heard that I had been in a gun-battle (!?!?) and was understandably impressed/worried.

In 2006 the Mererani mine was nationalized by the Tanzanian government. I believe that conditions there have much improved. It’s hard to imagine how they could have gotten worse.

It’s not exactly swashbuckling, but it’s as close as I’ve come to a Dante exploit.

SF: I tend to follow specific creators, many of whom are my friends or people I work with here in Brooklyn. I always check out what Dean Haspiel, Michel Fiffe, George O’Connor, Mike Cavallaro & Tim Hamilton are doing. Becky Cloonan always makes great choices about what she does. I’ll buy anything that Grant Morrison and Frank Quitely do together. Darwyn Cooke is a favorite.

Further afield I’ll buy anything that Paul Schuiten, Nicolas DeCrecy or Francois Boucq decide to draw. I’ve become a fan of Guy Delisle recently, I admire how he manages to create a complex portrait of a culture from such deceptively simple observations. It’s great to finally have a collected edition of Nick Abadzis’ ‘Hugo Tate’ work.

Jack Kirby. Pic by Alan Light.Moebius. Pic by Jarek Obważanek.RHM: Who was the person you wanted to meet but couldn’t?

SF: Jack Kirby. There are so few real visionaries in comics or any other medium. Kirby was one of the greatest of modern times.

I saw Jean Giraud (Moebius) across a crowded room a couple of times , but was too intimidated to go over and talk to him. That’s a regret.

SF: You are quite welcome.