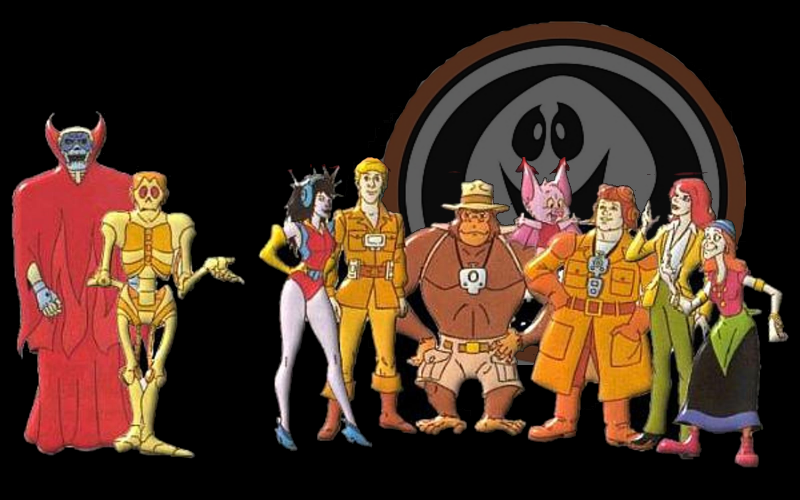 Let me get this out of the way: I’m worn down by people raging over the 2016 Ghostbusters movie (Misogyny? Corporate apologetics? You decide!) that I have little enthusiasm for the movie at its release. The hype inspired to take an “ironic,” rebellious take of siding with the Filmation Ghostbusters and looking up their comic book history.

These Ghostbusters were a separate media franchise first established as a live action Saturday morning show about 10 years before Columbia Pictures’ blockbuster. As Columbia had permission to use the Ghostbusters name and had something scorching on their hands, the mega-popular GB franchise soon lauched long-running toy lines and cartoons. Not to be outdone, Filmation also made deals to produce toys and a cartoon.

Filmation’s Ghostbusters seems like a good series to distributed via newsstands. While Wikipedia’s First Comics article states the publisher, one which produced for the direct market of comic book shops, was experimenting with newsstand distribution around 1986, I could find no information whether this title actually did.

The kids who got, or were duped into getting due to confusion w/the other Ghostbusters, the floppies have fun and games. For example, to finish off Prime-Evil, one must draw half his face???

The first issue has been reviewed by some web sites. The impressions ranges from Chris Pearce’s enjoyment:

The art in this comic by Howard Bender [is] polished and nicely colored by Wendy Fiore. The script by Hilarie Staton is rather smart in the way it weaves the kiddie-centered activity pages (including mazes, word puzzles, and more) into the main story.

To Spectrum of Madness’ rating the comic “Annoying:”

You wouldn’t think [preparing for a Halloween party] would be something that would excite them, since ghosts are kind of their job. Heck, I don’t even know why they’d be planning anything social on Halloween. Not only would you assume that’s when the most ghosts are out, the show in addition to this comic made a point of that.

Then there’s the answer pages to the other games, and then six pages about how you can draw the characters from the show. As if anybody in the show’s demographic has that kind of attention span.

While I’ve not read these comics, I don’t have a problem with the idea that a comic book made for kids would have activities and games inside within the story. Though I won’t look forward to the day where a property made for children is modernized, or even “Watchmen-ized,” for middle-aged dudes looking for something to add in their pull lists. But enough of me dwelling on the 2016 Flintstones comics.*

There was a 1987 annual published by World Color Press for the United Kingdom market. My Google-fu is failing to find any further information as it’s probably a very rare comic. Mile High Comics sells this comic on eBay for over $100 OBO which may stretch the budget of even the biggest Filmation Ghostbuster fan. 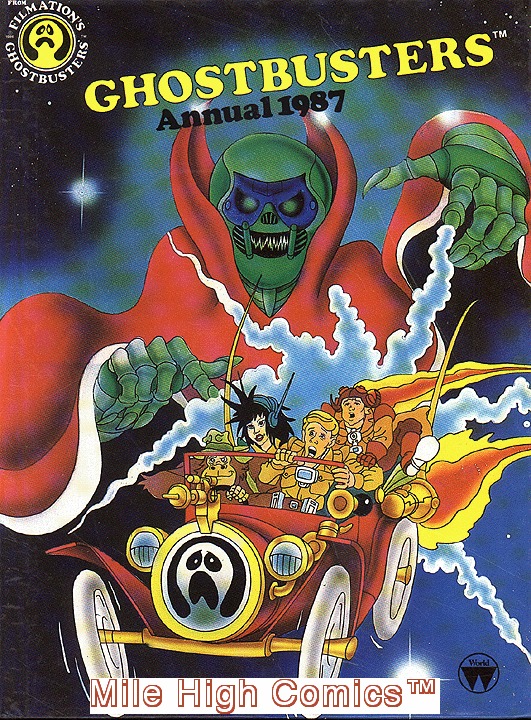 There’s also an adventure called “Mystery of the Missing Fathers,” credited to “G. Poston, M. Moran, C. Schurr, and D. McBride.” This tie-in to the action figure line has the Ghostbusters look for their dads who were the original Ghostbusters. Dan Alexander shared the comic for his web site Dizmentia. The artwork looks off; maybe it’s because everyone looks off or maybe it’s the painted colors.

Ultimately, the story is really rushed through various locales and familiar faces included a lenghty battle with villain Prime-Evil. The reunion of the Filmation Ghostbusters is on the very last panel.

Head on over the Dan Alexander’s Dizmentia to see the full comic.

There’s your history and we didn’t have change clothes in an freaky-looking closet/wardrobe room. 😀